Amazon offering a deal on LEGO Marvel Avengers Truck Take-Down. Shipping is free w/Prime or on orders of $25 or more. 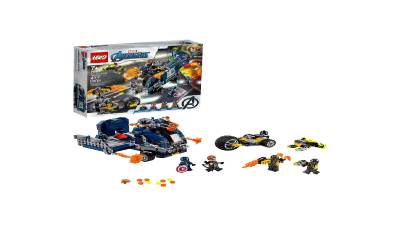 Captain America and Hawkeye’s LEGO Avengers truck is ambushed by 2 bad guys on a motor-trike with a drone. Time to reveal the truck’s secret 6-shot crossbow! Kids will love this cool superhero action set with 4 LEGO Minifigures and the Avengers truck. Put Marvel action into the hands of young superheroes with this super cool set.

Stud bullets fly as 2 bad guys swerve their trike in front of the Avengers’ truck then launch an attack with a drone. Kids will love opening the truck to reveal the secret weapon… a huge 6-shot crossbow! With 4 Minifigures (3 of them new-for-January-2020), Avengers truck, motor-trike, armed drone, and lots of stud-shooting weaponry, this buildable LEGO Marvel Avengers toy will inspire endless imaginative fun. Give kids the hot toys they love! With awesome vehicles, mechs, buildings, mini-figures, weapons, and gadgets, LEGO Marvel Avengers sets are great for fans of the movies.