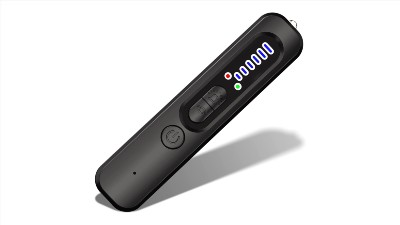 Are you being bugged?

Whether you’re conducting high-level negotiations, being snooped on by the tabloids or worried about peeping toms, hidden spy cameras are a real possibility virtually everywhere these days. They’re small enough to be hidden in fixtures and fittings (like smoke detectors, clock, USB charger and even light bulbs, ect.). Thanks to WiFi and cellular connections, They’re also able to send sound and pictures far afield if you don’t catch them in the act.

There are two key methods to detect wireless hidden cameras. The first is to look for the reflect dot of the lens. With a red viewfinder that lets you search for bugs with eyes, no matter hidden spy camera is on or off, you will see red spot when detect a hidden camera.

The other core approach, especially relevant in the era of live-streaming of video signals, is to look for unexpected radio frequency (RF) signals emitted by the sharing of the data. You can walk around your house and look for unusual sources of RF emissions, making it pretty simple to find a bug. This is also useful in spotting other live snooping tools, like GPS trackers.

With a red viewfinder that lets you search for bugs with eyes, no matter hidden spy camera is on or off, you will see red spot when detect a hidden camera.

When you don’t detect the GPS trackers in “Wireless Signal Detection”, you can use this mode to detect GPS tracker. Most GPS trackers are magnetic, it can be easily magnetically attached to vehicles.

Flashlight for finding hidden devices in the low light

With flashlight function, when you detects suspicious devices, you can turn on this function to find out it. You can also use it as lighting in the dark.